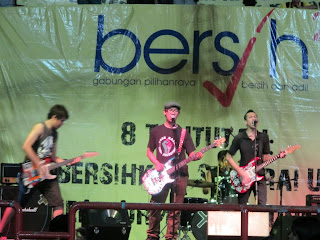 I arrived at the stadium at 4 pm. Not many people came yet but more and more people arrived as the day turned to night. I didn't watch all of the other acts as I was selling some CDs and zines outside the stadium. Watched Soul Savior, The Garrison, and one song from Atama, one song from "Blues Gang" and the poem recitation by A. Samad Said.

About 800 people showed up at the concert despite the light rain. We played 6 songs; 3 cover and 3 new tracks from the new split CD. Nakid (Fael's brother/vocalist of Half-Asleep) replaced Rizie who is currently not in the country for work. We sold quite a number of the CDs by shoving it in the faces of every passerby who crossed in front of our little booth outside the stadium saying "This CD's just out, and we're playing tonight!", kah kah kah...carik makan bro.

We had lotsa fun and positive feedbacks. Thanks to Hishamuddin Rais, Hadi Distro Buku, Diqin/Acino Radio Bangsar Utama, Azri Rotten Ruckus and Apeng The Garrison for lending us the guitars, Aizat Tarmizi who shared the booth with us, Soul Savior and Termerloh kids, Pyan Habib, Nik Jidan for trading CDs and everyone who showed up and stayed until we played at 9.30 pm. 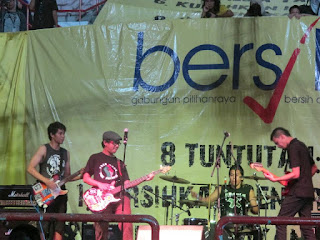 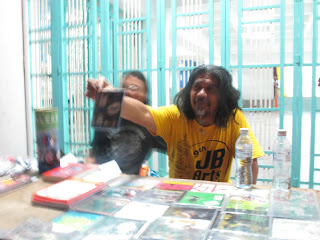