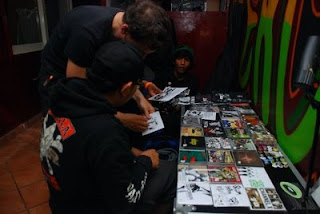 It was my first experience traveling by train, as far as I remember. I volunteered to buy the ticket and reached the counter at 9.10 and was pissed off since the counter closed at 9 and had to go to KL Central back the next day. The Melanggar Todak crew that accompanied us were Norly, Tobek, Fara and Arep.

We departed from KL at 9.45 p.m and reached Tanjong Pagar train station at 8.30 a.m. As we arrived, Hafiz Pazahora, Vanessa and Dipz (Fara’s friend) were already waiting for us and we had breakfast. We then straight away take the bus to Crawlspace- the venue for the gig and also where we will spend the night. It is exactly at the back of Straits Records, but you have to enter from the back. 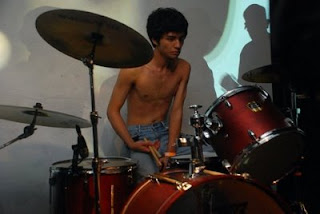 Crawlspace is a gig venue cum jamming studio with this hinged wall that can be opened like a door to give bigger space for events such as gig or screening. I think the space is quite new. It was already 10.30 a.m at the time we reached the venue so each of us took turns to bathe before going out. We went to , , and also Roxy Music Centre with the tourist guide of the day, Dipz. I took the chance to go to Straits Records as we arrived at the venue, a store carrying hardcore, punk, independent releases, zines, and stuffs. 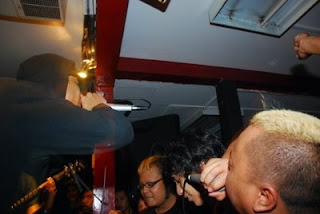 At 6, the kids started to show up for the gig but we went to ate first at Kampung Gelam. There, we met with the kids from Full Pledge Munkees who are also playing a ska punk show ‘Ska Punk In Town’ there. 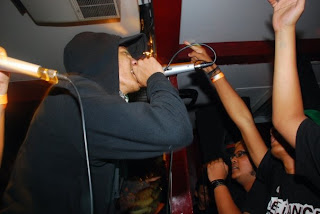 As we arrived back at the venue, more kids were there. The venue owner helped by the kids also stands a canopy for the kids to hangout at the back. The first band played was Pazahora which kick off at about 7.30. This is followed by This Is Atlantis. We were put as forth band on the bill, but as we were eager to play we asked to play third, with the excuse, Distrust is launching their split CD with Osmantikos, so they should play second last before Osmantikos. 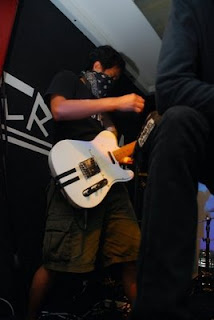 I think we played all the songs on our CD except ‘Pergi Jahanam Kau’ and ‘Dunia’ which were not on our setlist. We also didn’t play ‘Perangi Mereka’ because we were too tired and also ‘Hentikan Penindasan’ which we forgot to play. We played the usual cover ‘Negri Ngeri’ from Marjinal. That makes it 10 songs, without a doubt, this is the longest set we ever played. Actually 2 days before , we jammed and made a new song that we want to debut it at the show, but we cancel to play it last minute because of lack of confidence. 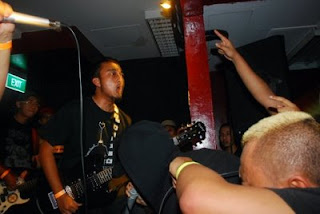 The show was carried on by Distrust and closed by Osmantikos. We sold like 10 CDs that night and 6 shirts. Thanks for those supporting us.

After dinner eating large Murtabaks, Hafiz and Vanessa took us to Mustafa Centre at 2 a.m and bought some CDs and chocolates. We got back to Crawlspace at 4 a.m, and it was so coldddd and freezing! The coldest gig venue everrrr… 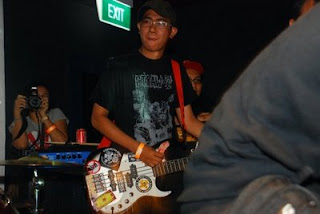 The next day, we had to wake up and clean the space we slept on because some kids wanted to jam there at 1 pm! We went to Borders to buy some CDs and rushed back to the venue to pack our stuffs, speedily ate our lunch while the some managed to do last minute shopping at Straits Records. Hafiz, his girlfriend and Syamsir of Distrust accompanied us to the Lavender bus terminal.

Thanks a bunch especially to Hafiz and Vanessa, Dipz, Syamsir, Ep, Shaiful, Peter, Crawlspace, Straits Records and all the kids who supported and helped us in any way while our stay at Singapore. Wish to be back there soon. 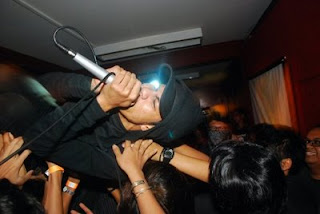