if we can't dance to your revolution then screw you 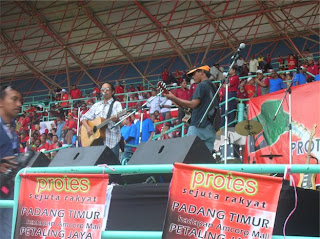 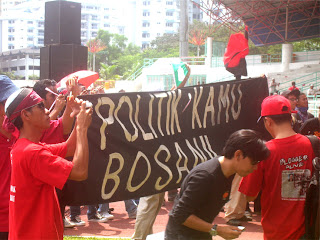 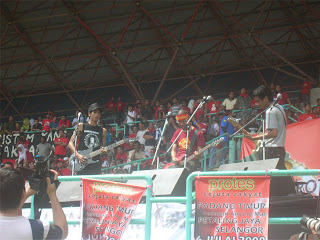 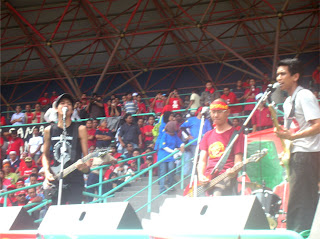 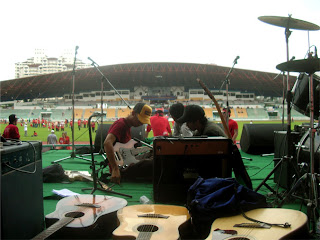 photos by Arip Steward
OK, we were on 'standby' as of the night before. So, I went to the stadium and arrived at about 10.30 am. I saw there's a stage complete with all the instuments, amps, etc. So I approached Hisyamuddin Rais and he grabbed me and tell me that our set is at 2pm after Zohor break.
I tried to call everyone but the network was busy in the stadium I had to go outside and tell the rest of the band and also some friends that asked. We gathered at the stage at about 1.10 pm. After the break, then the lady MC asked us our song titles. After the Indian drums set, she announced our band's name as "lawan tetap lawan" and also our song titles to the crowds.
Rizie made a short speech about the protest that belongs to ALL of us not only to certain Parti supporters/followers. We have to respect each other. After our first song, 'Hentikan Penindasan'...they guy in charge came to me and said that's it. You guys have to stop. and I said let us play one more song. He said, they cannot allow us because they already discussed in the meeting this kind of 'hard' or 'fast' song is not allowed. We ignored him and played two more songs, 'Demokrasi Tanpa ISA' and a cover 'Nyanyi Budaya Pembebasan'.
Then I looked at Hisyam and he gave me the sign to wrap it up. And we said, thank you to all. We were quite frustrated because we only had the chance to play 3 songs. But it's better than to play only one song. And we had a great experience playing at a stadium with crowds from the public and demonstrators. Not only punk/hc kids or gig-goers like usual.
After the set, we went and lepak for awhile outside the stadium. One reporter from Malaysiakini met Rizie and asked him some questions but he was rushing to go to work and gave my number to him. He asked me some questions including about our band. Read the article he wrote up there!
~nizang