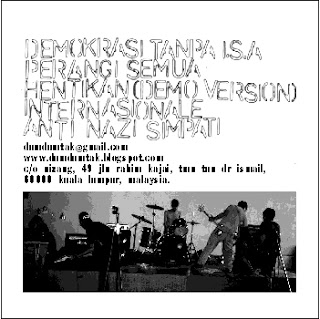 So, after a few postpones, we finally got into the studio to record! The session started at 12.30 am after dinner and lepak2 at the mamak downstairs. And we finally finished recording at 5 am!

4 hours and a half! Everything went smooth and easy except for recording the song 'anti nazi simpati'. It took us about 10 tries to finally satisfy with it! The other songs are quite ok, and only took us 2-3 times and one song were okay on the first take. These songs will be released as our first demo. Fael is currently doing the mixing while nizang is doing the design.
Oh ya, Joe Kidd was there during the recording and produced the demo! How great is that man. It's all like dream...Another big thing happening this year that's also like a dream come true is joining a compilation with bands that we all loved and idolized so much growing up; Carburetor Dung, The Bollocks and FSF. Other bands on the comp. are great too!

the tracks recorded are as follows:

wait for the release...:) the inlay and back-cover is about done, but not finalized yet! do give comments