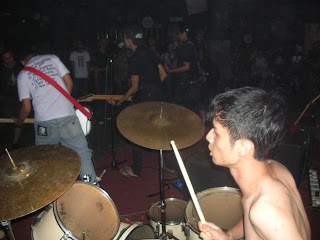 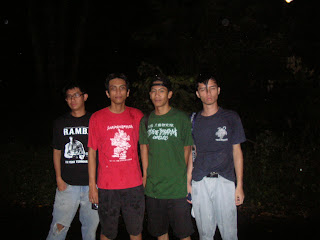 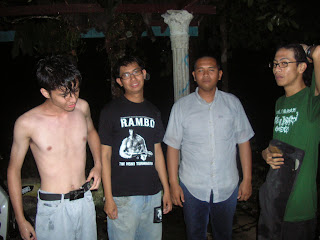 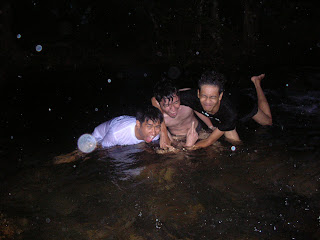 Well, Jerantut show was lotsa fun. When we got there, one kid came to fetch when we stopped for snacks at the petrol station. and guess what, the kid was Debab that I've known from Shabri before. He was there when we went to Penang for Kasih Sayang show if I'm not mistaken, and yeah, so basically we know each other. So it was all quite easy for us. He took us for lunch and
even paid for it!
We played last, and managed to catch Alchemy of Sickness (one guy from AoS used to write me letters but I didn't had time to talked to any of them), Soul Saviour (from Temerloh). We played all songs and there was plenty of time left. The gig ended at 5 pm. We lepak and drank tea in front of the pub until 6pm. Debab had planned earlier to bring us to go and mandi at some river nearby. The money we got was enough to cover the petrol and toll.
We went all the way and it's so deep in the forest. We mandi sungai for about 20 minutes and it's maghrib time and I guess Fael felt goosebumps so we decided to leave. Pity Debab cause he went on his bike, so he was all wet since it was raining cats and dogs. It was hell lotsa fun for us.
We then head to a restaurant which is at the petrol station Debab fetch us earlier and chat until 10 or something. Then only we went back to KL. Upon reaching KL, FAel and I lepak with Mat Pitt FSF until 3 am at Ampang while the two slept in the car. Thanks to the organizers and kids of Brontox and Soul Saviour.
Enjoy the pics...if you have more pics of us in Jerantut or elsewhere, do email it to dumdumtak@gmail.com